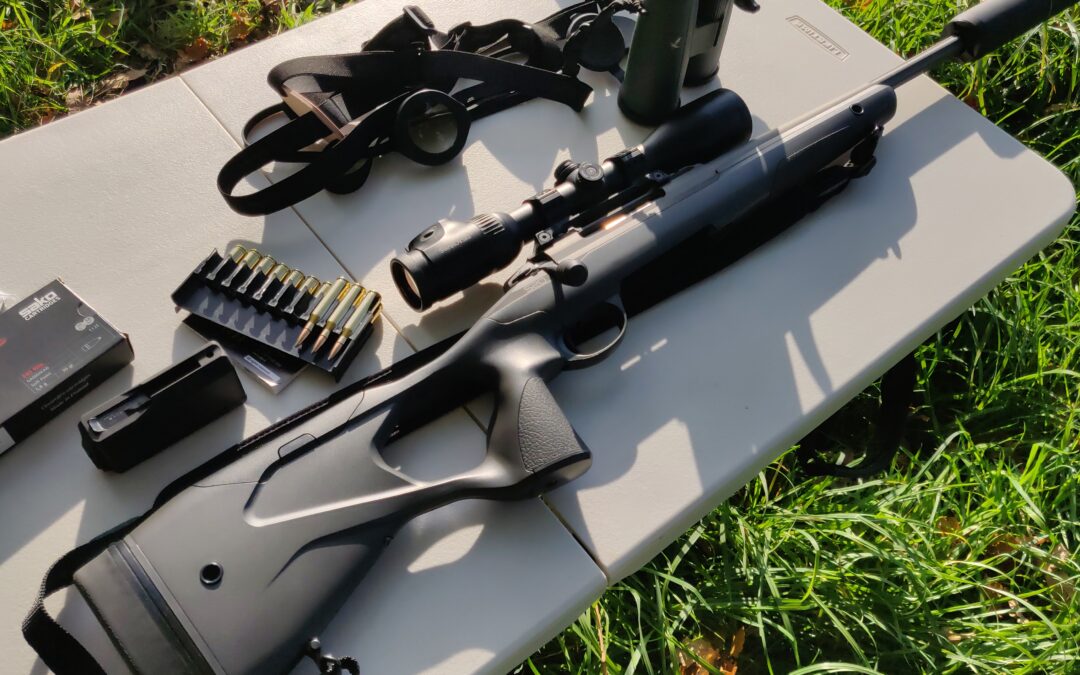 Having finally got my hands on my new Sako rifle, and spent a couple of hours fiddling around with little wrenches to get the Swarovski scope fitted, I needed to zero it.

Zeroing is the process of calibrating the sights to the rifle, of making sure that at a given distance – typically 100 yards – the sights are pointing exactly at the spot where the rounds are going to land. The dials on a rifle scope allow us to fine tune the position of the crosshairs, aligning them with that point of impact, so that when we then aim at a desired target, that’s where our bullet will land, provided we are shooting at ‘point blank range’:

Point blank range is the range at which we can hit our target by aiming directly at it, all other things being equal. It is effectively the range at which we have zeroed our setup. As we shoot over longer distances, the bullet will drop during its flight, and we will need to either aim at a point above our target, a technique termed ‘holdover’, or to adjust our scope to compensate. The Swarovski Z6i BT I scope makes this easy, having a ballistic turret feature, which allows you to quickly select between different user-defined distances.

As per the conditions of my certificate, I had to tackle the zeroing process under the guidance of Peter Jones, lead instructor at The Capreolus Club. As described in my previous article, Obtaining A Firearms Certificate, novices are not just let loose with these kinds of weapons – we have to have some sort of mentorship until we’ve gained sufficient experience.

I met up with Peter in a layby, in a picturesque Hampshire village. The club has permission to shoot over much of the local area, and we set out in search of a suitable place to set up. It was our plan to go out for my first ever stalk later that day, and we had to be careful not to go making a load of noise in areas which we wanted to ‘save’ for stalking – deer aren’t idiots, and they tend to skedaddle when the shooting starts.

Aside from keeping away from our likely stalking locations, we had to contend with the fact that many of the obvious fields were full of sheep. I’m not yet experienced enough to know all the golden rules of keeping your Land Permission intact, but I’m fairly sure that ‘Not killing the landowner’s sheep’ comes quite high on the list.

Eventually Peter found us an empty field, and we scaled the gate, and began looking for a hundred yard stretch, with a safe backstop.

What is a safe backstop?

What we needed to see was a bank of soft earth – something that would reliably absorb the bullets we were going to fire. Rocky ground, or water would present an unacceptable risk of ricochet. We needed a good ‘finger’s width’ of ground visible between our target, and the horizon.

There were hedges all around, and in the English countryside hedges often mean roads, cars, bicycles and pedestrians. Behind other hedges hide houses, barns and other outbuildings. The potential for a stray round to damage, injure or kill must always be considered. This is where experience and good judgement come into play. This is the reason I have a condition on my certificate that requires me to shoot with a representative of the club. I am here to learn how to zero my rifle. But more importantly I’m here to learn how to gauge what is a safe shot, and what is not.

The field banks down and flattens out by a stream. By putting the target down on the lower ground, and setting ourselves up higher on the bank, we find a position where not only are we shooting down into the soft ground, but the bank of the field curves around behind the target, providing extra protection. It’s not an obvious solution – not one that I would have spotted on my own.

We get to zeroing.

Throughout this process, we really want to take ourselves out of the equation as much as possible. Human error – our inability to hold the rifle perfectly still – will confound the procedure. We are going to be looking for consistent ‘groups’, rather than making judgements based on the accuracy of any individual shot. The accuracy at each setting of the scope will be harder to establish if the shots aren’t tightly grouped. To make the process faster, easier and more reliable, Peter produces, from the car, a device he refers to as ‘The Sled’. Googling later, I see that it’s a product called a Caldwell Lead Sled – basically an adjustable rest, in which you can place a rifle, lined up on a target for more accurate, consistent shot placement. By using the sled, the rifle won’t move with every twitch of a muscle, or indeed every heartbeat.

We set up my Sako S20 rifle on the Sled, and begin with ‘boresighting’. Boresighting gets things into the right ballpark. You remove the bolt from the rifle, allowing you to see through the chamber, and down the barrel. By visually aligning the barrel with the target, and then aligning the crosshairs of the scope with the target, we know that we’re not going to be missing the paper entirely.

Next, it’s a matter of putting some rounds through at a short distance of around 30 yards. By first zeroing at that distance, we can save time when we progress to 100 yards. We put a few rounds onto the target, and Peter shows me how to adjust the Swarovski. I’m familiar with the basic idea from zeroing air rifles as a kid. Depending on the position of your group, you adjust the windage and elevation by a given number of clicks in the appropriate directions.

Once the shots are grouping in the right place, we move out to 100 yards. Peter paces out the distance. A yard is just under a metre – 91.44 cm, to be exact. I have worked out that with my stride length, 100 yards, or 91.44 metres, is 115 paces. I am small. I have little legs, and short paces. Peter is tall. He probably has to get his trousers in some sort of custom length. His 100 yards is probably 50 paces or something. He’s The BFG, and I’m that weird little girl in the nightie.

If you’re interested in getting involved in deer stalking, visit County Deer Stalking.