How do we lose fat? Part 2: Sidestepping Satiety 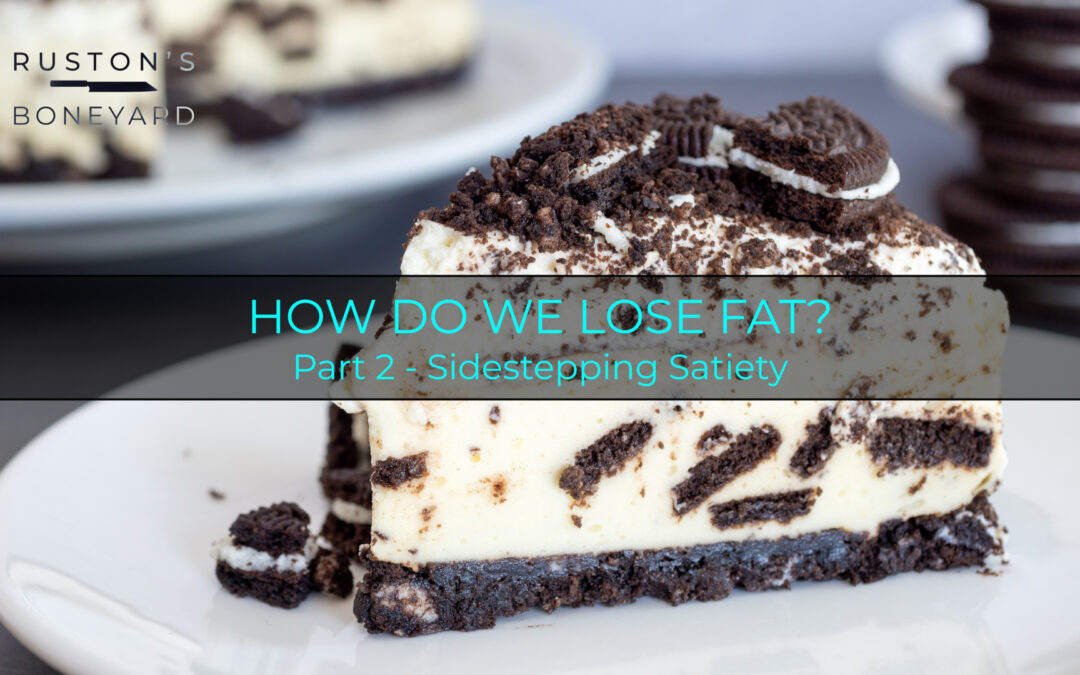 In Part 1 we mentioned some behavioural traits that kept us alive historically, but which in the modern world, are hazardous to our health: Our propensity to overeat when food was available – our dopaminergic relationship with food.

And there are people all too willing to exploit those traits for financial gain – our addictive relationship with food is well understood by the food industry. A major turning point came in 1985 when tobacco companies realised that the writing was on the wall for smoking – that it was going to be increasingly legislated against. R J Reynolds bought Nabisco, and Philip Morris went on to become the world’s largest food company, absorbing General Foods and Kraft. The idea behind this move was that processed food would become the new replacement for cigarettes. Their first order of business was to bring to bear all their extensive expertise in the development and marketing of addiction.

A big part of that process was ‘food engineering’ – the science of making food more compulsive – more addictive. Research led to particular combinations of salt, fat and sugar, designed to elicit the greatest dopamine response, and the lowest levels of satiety. They learned to manipulate both flavour and texture to those ends: A product might have large salt crystals on its surface, opening up the taste buds immediately, followed by the melting texture of a vegetable oil, and the enhanced sweetness of high fructose corn syrup to hit what they refer to as the ‘bliss point’.

Food engineers developed combinations that allowed them to increase sugar, while simultaneously using salt and other compounds to reduce nausea, to suppress the hormonal satiety signalling that would normally prevent a person from over-consuming energy. Competition eaters use these same tricks, adding salt to suppress satiety when faced with enormous quantities of sugar and fat. Manufacturers manipulate every aspect of these foods, even down to the quantities they’re packaged in, and the wording they use to drive the consumer to eat more.

You can demonstrate the effect of food engineering for yourself. Calculate the amount of sugar in a packet of chocolate biscuits, something most of us can easily eat until they’re all gone, and then try to eat that same quantity of table sugar. You can’t do it, and that’s no surprise – the first brand I looked at had seventeen spoons of sugar, and some 1300 calories in a packet, yet because these products are engineered to suppress our satiety, we’re able to keep eating.

In his harrowing 2013 book ‘Salt Sugar Fat: How The Food Giants Hooked Us’, investigative journalist, Micheal Moss exposes the secretive development of these practices, and the corporate decisions behind them.

What we notice about these engineered foods is that they mimic characteristics of certain whole foods which we evolved to seek particularly fervently. The primary example of this is breast milk. Breast milk is the only naturally occurring food that contains significant amounts of both fat and sugar in combination – most whole foods contain one or the other. It’s critical to our survival as a species that a young human being takes on as much milk, in as short a space of time as possible. A baby is incredibly vulnerable in the wild, and the faster they grow, the more likely they are to survive. We couldn’t afford to find breast milk too satisfying. This may explain why we have a near limitless appetite for combinations of fat and sugar, and why adding in a dairy component, which is compulsive on its own, can make a food product irresistible.

Another example of this whole food hyperpalatability pertains to the sweet taste of fructose found in ripe fruit. Table sugar is a combination of glucose and fructose in equal quantities, but the glucose is actually not sweet-tasting. If you taste pure glucose powder, it’s surprisingly bland. It’s the fructose that provides us with that satisfying, addictive sweetness, and it can affect our behaviour, making us less inhibited, more impulsive. It actively shatters our resolve to resist temptation, and this would have helped us to seriously over-do the fruit consumption – to fatten ourselves up for the coming winter. People that exhibited this hedonistic response to sweet-tasting foods would have been more likely to survive to reproductive age, to pass on that trait to future generations. Today, food engineers take advantage of that by concentrating fructose into ingredients like high-fructose corn syrup. This allows them to make a product intensely sweet and so more dopaminergic, more compulsive, but without any of the nutrients that fresh fruit contains.

We even have the technology to selectively breed, and to modify fresh fruit to contain more fructose. We can effectively make a hyperpalatable version of a whole-food that’s already naturally moreish.

It’s not just sweet foods that elicit this response. Early humans met the vast majority of their nutritional needs with meat. The analysis of human remains is exceptionally compelling in this respect, with nitrogen isotope data showing us to be high-trophic carnivores. The most pivotal step in our evolution was the development of our hunting and cooking skills – we were able to fuel the development of metabolically expensive brains by hunting megafauna – big, fatty ruminant animals like mammoth and mastodon. We retain a primal association between the taste of meat, particularly seared meat, and the intake of essential nutrients. Food engineers take advantage of that ‘umami’ flavour to make a product more compulsive. They can make something taste nutritious, while never really satisfying us. In the same way that an artificial sweetener tastes like energy, but never provides any, these flavourings imply a nutrient content that isn’t there – they’re artificial meateners. A classic example of this is the Dorito corn chip.

Of course, historically this dopaminergic relationship with hyperpalatable foods was an advantage – it drove us to gain fat when resources were plentiful, storing it up to sustain us over leaner times. But in the modern, developed world, there are no leaner times. Hyperpalatable foods are also hyper available. Processed food products are cheap to make, cheap to buy and have a long shelf life that represents a disconnect with the natural restrictions imposed by seasonality. And again, it’s not just processed food – we can fly fresh fruit halfway across the world in a day, making foods that would once have only been available for a few short weeks at the end of summer, an option every day of the year – we can eat fresh Mangoes on Christmas Day in Alaska. We can manipulate the foods themselves to grow when and where we want, and we have endless ways to preserve and transport them.

So we are developing products that take advantage of our biology, to create more demand. We’ve talked about how these foods get around our natural satiety signalling, and it’s that complex signalling that we really need to work for us if we’re to keep our body fat down in the long run. Obviously we’re going to need to avoid foods that deliberately circumvent satiety, but there’s another aspect of the way we eat that can make our meals fundamentally unsatisfying. It’s one that affects almost all processed food, but also whole foods too, and it’s all to do with the balance between nutrients, and energy.

We have two broad requirements from our food – the provision of nutrients and that of energy. In terms of nutrients, we need to think primarily about protein – the complement of essential amino acids that we need to build, maintain and repair our bodies. Along with protein we need certain essential fatty acids, and of course, micronutrients – the various vitamins, minerals and other compounds that we can not live without. In terms of energy, we fuel our activities from either fat, carbohydrates or both. We can create energy from the amino acids in protein via gluconeogenesis, but it’s a metabolically expensive process – a fallback, if you like, and we shouldn’t aim to use protein as a source of energy.

Our satiety signals, the complex hormonal messages that tell us that it’s OK to stop eating, are dependent on us having enough of both nutrients, particularly protein, and energy. If we are lacking one or the other, we are going to remain hungry. One of the fundamental reasons we gain fat is that we’re constructing meals that contain too much energy and not enough nutrients. We will not stop feeling hungry until we’ve had enough protein, and if we try to satisfy our protein requirements with energy-dense, nutrient-poor foods, we will overeat energy in the process.

We can tolerate a degree of calorie restriction in terms of our energy needs, because we begin to use our own fat for fuel. Once we’ve restricted our energy intake for long enough to achieve our goals, we can increase our calories to a maintenance level. But if we’re not satisfying our nutrient requirements, we’re going to be constantly hungry throughout. If our desire to become, and remain lean is so strong that we’re able to resist that chronic hunger, we will ultimately become malnourished, unable to maintain our valuable lean mass. This is an unsustainable scenario, because the body is never going to stop asking for those nutrients. We will eventually need to increase our intake, driven to compensate for that nutritional deficiency, and if we’re still not eating the right foods, we will begin overeating energy all over again. And because during the course of our dieting, we’ve reduced our metabolic rate – a side-effect of calorie restriction, and yet another evolutionary protection mechanism our new energy surplus is all the greater. The result is that the fat we spent eight weeks losing, is back on in eight days.

We can’t sidestep this cycle, and join those few people who succeed in maintaining fat loss in the long-term, without correcting that balance between nutrients and energy. Neither can we supplement our way around this. Nature provides us with the perfect balance in the form of whole, unprocessed foods, eaten in an evolutionarily consistent way. In later parts, when we talk about what to actually DO about all this, we’ll discuss which foods offer us the best bang for our buck in terms of nutrients, as well as how we can tune in to our satiety signals.

Next time we’ll take a look at how our hormones can affect our fat, and our health.

Disclaimer: I am not qualified to give any sort of medical or dietary advice, and nothing in this material should be considered as such. The opinions expressed here are my own, and for the purposes of discussion only. Please consult a qualified medical professional before undertaking changes to your diet.

Ghrelin and glucagon-like peptide 1 concentrations, 24-h satiety, and energy and substrate metabolism during a high-protein diet and measured in a respiration chamber: https://pubmed.ncbi.nlm.nih.gov/16400055/

The evolution of the human trophic level during the Pleistocene: https://onlinelibrary.wiley.com/doi/full/10.1002/ajpa.24247

Fructose and uric acid as drivers of a hyperactive foraging response: A clue to behavioral disorders associated with impulsivity or mania? https://www.sciencedirect.com/science/article/abs/pii/S1090513820301215